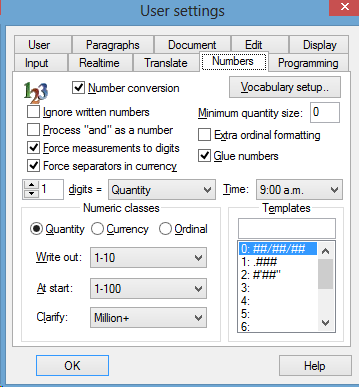 The answer is yes. However, you have to be more careful than someone using the number bar.

The pros of writing them out is that when you’re writing at rapid rates (RMR, for instance), you’ll be able to figure out what you tried to write even if you’re off a key. This is the reason I got used to writing out in school. However, school does not mimic real life. In real life, you generally have ample time, and even if you flub one number, you can listen to the audio.

The reason why people use the number bar is because it is incredibly more efficient than writing out your numbers. You can get 000, %, and many more things WITH your number strokes, which is something a lot harder to do when you write out.

If you do write out and you write realtime, you will need to be careful. These are the scenarios.

1. Two DUIs will look like 2DUIs if you do not FORCE a space in between. So will, let’s look at document number two DCK3 will be number 2DCK3. It’s very hard to catch these things in your mind at first as a new reporter, but in captioning, you can see what you write instantaneously, so it’s easier not to let such an error out even if you forget.

2. Let’s read through January first. It will translate to January 1st, even if the attorney means first IF you do not force a space.

3. The first of May will translate just like that unless you FORCE ordinal {#O} or set up a macro with “the ___ of MONTH.” You can set up a similar macro with time. When they say ___ in the morning, in the afternoon, in the evening, other trigger words. More on that in another post.

4. You have to be careful how you write numbers if you want them to translate perfectly. Here are common examples:

It takes a little practice, but you basically ALWAYS leave out “and” in numbers when you hear it. If you follow those above examples, you should almost never have problems with numbers.

5. A document the exact length of a Social Security number or phone number will translate in those formats. Make sure to write DL-T or some other key in between one of the numbers if you sense that it is about that length. Or you can turn off the Social Security/phone translate and make your own macro for SSN and phone numbers.

6. Of course, keep in mind that when dealing with numbers, you often deal with colon, hyphen, percent, decimal, digit macro, date macro, time macro, and ordinal macro. See the punctuation post for more details on how to input the punctuation in correctly.

SSN, phone number, and height macros I will discuss in another blog post.

SSN, phone number, and height macros I will discuss in another blog post.

One thought on “Can I Write Out All My Numbers?”