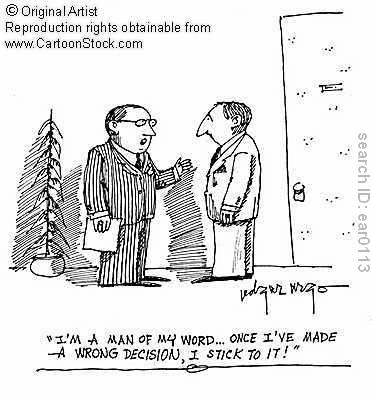 This is something I’ve just discovered recently, and I think the concept is something we all know but have been unable to explain. It is important to know.

Have you ever been caught up in a bad career, relationship, or even object that was causing you a lot of problems, but you did not want to let it go because you felt like you came too far, spent too much, made too many great memories?

Then you have been a victim of the sunk cost fallacy.

Here is an example from Wikipedia:
Many people have strong misgivings about “wasting” resources (loss aversion). For instance, involving a non-refundable movie ticket, many people, for example, would feel obliged to go to the movie despite not really wanting to, because doing otherwise would be wasting the ticket price; they feel they’ve passed the point of no return. This is sometimes referred to as the sunk cost fallacy. Economists would label this behavior “irrational”: it is inefficient because it involves suffering in two ways (money plus wasted time), instead of just one (money).

Instead of making decisions based on facts at hand, people often make decisions influenced by a past decision that should have no bearing on the now.

I am a fan of the saying, cut your losses and move on. Sometimes this is the reality in life, in relationships, or in school. Many students eventually have to end the loss and cut out court reporting school altogether, but it’s better to cut things out early than to keep holding on to them because of the dreams you had or because of the time and money you’ve already invested. If something is going to continue to drain time and energy with no foreseeable payoff, then it is time to cut it out.

You can often see this when tackling clutter. We look at something we spent so much money on and recall all the hopes we had for it, but it just collects dust or takes storage space; every time you look at it, you feel guilt. The logical thing to say is, why let this object continue to steal space and energy more than it has? But our emotions influence us to keep holding on, to resell it in the future perhaps, even if we have no time. Don’t continue to take a loss for it. Cut it out. When reasonable, just donate or trash it. You are immediately gaining because you have freed your future and learned from your mistake.

We can also apply this on a micro level. Imagine something terrible has happened, maybe a shipment came in completely damaged, something was stolen. You can let it ruin your weekend, or you can move on after a day. You cut your losses and don’t allow bad situations to steal any more joy, time, and energy than they already have.

We have issues with letting go from a biological standpoint. Many of our ancestors had very little. We are told to finish everything on our plate, not to drop out of school, fix what we have, etc., and these things were instilled in us for survival. The general rule (don’t give up too early) was taught so we wouldn’t waste resources, but it leads to suboptimal decisions because we tend to carry that rule to everything in life and take on more losses than necessary.

Here are three more examples:
1. Finishing a bad book or movie because you’re already halfway through
2. Eating the rest of a dessert because you already purchased it and don’t want to waste
3. Keeping an object that you never use or enjoy because it cost a lot of money

Many humans have loss aversion. Meaning, losing $100 has a considerably larger impact psychologically on a person than gaining $100. So this is part of the reason why we often take on more losses, to try to avoid loss.